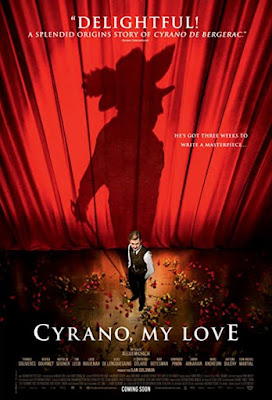 Written and directed by Alexis Michalik

Streaming on SBS On Demand

A movie based on real incidents and characters might not be historically true but sometimes you wish it was.  Such is the case with ‘Cyrano, My Love’, a hugely entertaining film from start to finish.

‘Cyrano, My Love’ is a 2019 French comedy/drama written and directed by Alexis Michalik.  It’s an adaptation of his highly successful 2016 play ‘Edmond’, which premiered in Paris in 2016.

In 1897 in Paris, the struggling young poet-playwright, Edmond Rostand, impetuously offers a role in a play to the famous actor, Constant Coquelin.  The only problem is that the play is not yet written.  He only has a title – ‘Cyrano de Bergerac’ – and only three weeks to complete it.  Distracted by the love stories of his best friend, temperamental actresses, the jealousy of his wife and the lack of enthusiasm of those around him, Edmond tries to write this play in which nobody believes.

The recreation of theatre life in 1890s Paris in this film is masterful.  Chaos reigns backstage with the casting of plays often for reasons other than skill or talent.  Temperamental stars rule the day and companies seem close to being shut down for financial and other reasons.  Against all odds, Rostand emerges triumphantly with a play that stands the test of time.

The performances in this film are delicious.  At the centre of the film, Thomas Solivérès gives an endearing performance as the anxious Edmond Rostand.  Olivier Gourmet is a charismatic Constant Coquelin, the first actor to play Cyrano and Maria Legault is delightful as the temperamental actress, Mathilde Seiner, playing the love interest, Roxanne.  The handsome Tom Leeb is perfectly cast as the actor Léo Volny, who plays the dashing but not very bright young lover, Christian.

Sarah Bernhardt, played with all stops out by Clémentine Célarié, darts in and out of the film as does Georges Feydeau, the famous French farce playwright, played by the director of the movie himself, Alexis Michalik.  A huge cast of character actors give great support to these leading performers.

It’s not surprising that many situations detailed in the play are inspired by Rostand’s day to day experiences with these colourful characters.  It’s great fun seeing how he incorporates them along the way.  It’s not necessary to know the play in detail but, if you do, you’ll have a wonderful time recognizing these incidents.

One of the highlights of this film is a laugh out loud scene involving a hotel reception clerk that is pure Feydeau farce.  Surprisingly, it’s a hapless Georges Feydeau himself who is caught up in it!

If you love theatre and the colourful characters that inhabit it, don’t miss ‘Cyrano, My Love’.   It’s streaming until December on SBS On Demand.

(The film was titled 'Edmond' when it played at the Alliance French Film Festival here in Canberra in 2020.) 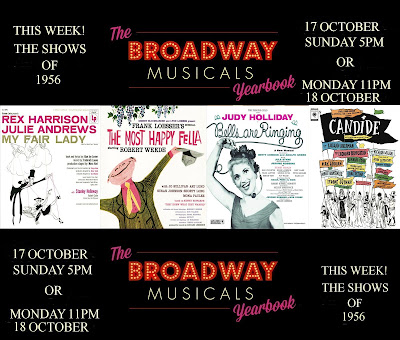 “The Broadway Musicals Yearbook” will be heard on Artsound FM 92.7 at 5pm on Sunday 17th of October and repeated at 11pm on Monday 18th of October.  The show is produced and narrated by Len Power, Canberra theatre critic, music critic and radio presenter.

1956 produced ‘My Fair Lady’ by Lerner and Loewe.  It’s still considered one of the greatest musicals of all time.  Frank Loesser’s ‘The Most Happy Fella’ also opened that year, as well as ‘Bells Are Ringing’ by Jule Stein and Leonard Bernstein’s ‘Candide’. 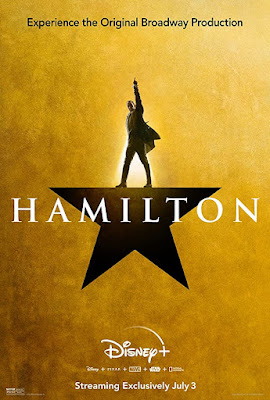 ‘Hamilton’, the musical with book, music and lyrics by Lin-Manuel Miranda was inspired by the 2004 biography ‘Alexander Hamilton’ by Ron Chernow.  It opened on Broadway in 2015 to great critical and audience acclaim, winning 11 Tony Awards and the Pulitzer Prize for drama.  Since then it’s become a ‘must-see’ phenomenon and the Sydney production is due to reopen on the 19th October after closing due to the Covid lockdown.

The Broadway production with its original cast was filmed live on stage in 2016 for an expected theatrical release in 2021.  However, Disney + reportedly paid $75 million dollars for the rights to show it world-wide on their streaming service where it is now available.

It tells the story of American Founding Father, Alexander Hamilton.  He’s pushy and abrasive which is OK because he’s just following the American Dream and, when he gets shot dead at the end of the show, we’re meant to feel sorry that his dream was shattered.

The music of the show draws heavily from hip hop, as well as R&B, pop, soul, and traditional-style show tunes.  It also casts non-white actors as the Founding Fathers and other historical figures.  This gives the show an added interest but it’s hardly revolutionary.  Anachronistic music scores are not new and colour-blind casting has rightly been around for a while now.

It’s superbly performed by the large cast, all of whom sing the very tricky score extremely well.  The direction by Thomas Kail keeps it all fast moving and it looks terrific – colourful and full of life.  The lighting plot is extraordinary, creating fast changes in atmosphere and mood.  There is constant choreography in the background by accomplished dancers that adds to the energetic feel and excitement of the show.

The lyrics are especially smart and incisive.  Not a big fan of hip-hop, I found that aspect of the music repetitive and wearying, especially in the second act.  Occasional flashes of harmony and various changes in music styles were a welcome relief.

If you are not familiar with this period of American history, it can be confusing to keep track of many of the characters being played by non-white actors.  I can understand Americans finding the subject matter enthralling as it celebrates their own history but I wonder how interesting it really is for Australians and others around the world.

There has been a vast improvement over recent years filming live shows for broadcast on television.  The filming and editing of ‘Hamilton’ is excellent.

I was satisfied to see the show via streaming.  It’s a fine show but not emotionally involving and I can’t see why it’s considered such an outstanding event when compared to other successful Broadway shows of the past few years.

‘Hamilton’ can be viewed currently on the Disney+ streaming service.